Spring dawned rather late in South Korea this year, but after a few days in Busan, the grey skies turned to blue and sunshine broke through the clouds. The crisp cool air became warmer and moister. What was perhaps the most apparent sign that spring has arrived were the blooming of canola flowers.

Along the banks of Nak Dong river in Busan, canola or rapeseed flowers were flourishing in mid April. Stalks of yellow waved under the strong wind, while locals were making preparations for the upcoming Canola Flower Festival in the southern port city of Korea.

Dozens of school children were giggling and playing amongst the tall stalks while teachers were trying to get them in groups for group portraits. 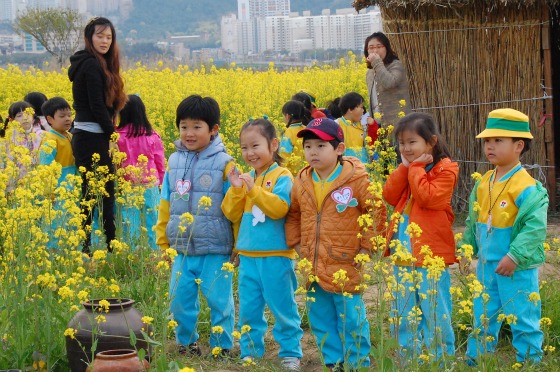 It turned out that these blossoms weren’t just enjoyed by the young. Even the old stopped by to admire the flowers. Several old ladies, completely clad in cycling gear, turned up with a biking entourage. 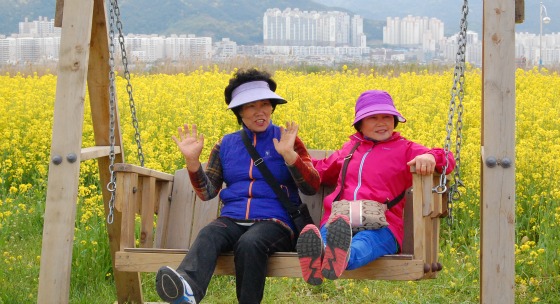 Aliff and his Screw The Box crew took their DJI Phantom for a ride. It was the coolest photographic gadget that I’ve ever seen. 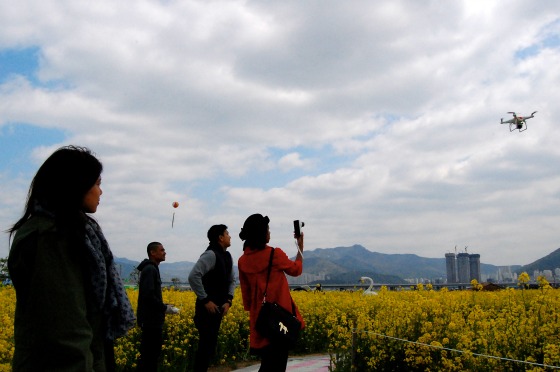 A sunny day usually gets me in good spirits. I usually don’t like taking photos of myself but that day was an exception. Swinging like a little girl just somehow felt like a moment to capture.

Do you reckon friendly scarecrows would do the trick?

Colourful whirligigs that spun joyfully under the wind

The Tiny Wanderer was a guest of AirAsiaX  and Busan Tourism Organization but the opinions and the prattle are of her own.

Ying Tey Reinhardt (Piccola Ying) is a Malaysian writer and copywriter based in Germany.

In her vagabonding heydays, she's backpacked to many countries, lived in a few, funded her wanderlust by teaching English to sailors on Italian cruise ships and making coffees in hipster cafes.

Pulau Kapas: the perfect Malaysian island to do nothing

A spontaneous weekend getaway in Sithonia

Why did I go to Albania? (Tirana in photos)

My Italian friends thought I was so little that they called me Piccola Ying. I was raised in the dusty sunshine of Kuala Lumpur, left the safe shores of my home for the world at 18 and have never looked back since.

In between, I've created my own charmed kind of life where I'd relied on intuition, kindness of strangers and the magic of serendipity. I have backpacked, lived a jet set lifestyle and had worked on Italian cruise ships for 5 years. When I'm not wandering, I write.

Love in the time of Corona. These two is what I'm

My religion is water. Not surprisingly, my star si

What is a home? Is it somewhere where you feel saf

Traveling is easy when you don't have to lug a wha

Wandering through the charming old town of #Vallde

Remember that time when we were just two friends w

It was one of those trips where we decided to just

One of the largest and oldest churches in Bratisla

Most people would think working in cafes or restau

🙇I sometimes do wonder, how would have life tur

It wasn't easy to find but we found it. The Blue C

How much do you pack when you go on holidays? 🎒


Error: API requests are being delayed for this account. New posts will not be retrieved.